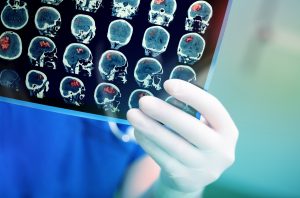 A fascinating story in Scientific American profiled a woman who was blinded by a stroke, but developed an unusual condition. She can see moving objects such as “steam rising from a coffee cup” but she can’t the cup itself. The condition, called “Riddoch phenomenon,” is very rare. Just a few people are known to have it.

The woman, Milena Canning, can see the swing of her daughter’s ponytail even though she can’t her daughter’s hair. Scientists hope her condition can lead to discoveries about how human vision works. Ms. Canning suffered a stroke when she was 29. The stroke “destroyed her entire occipital lobe, the brain region housing the visual system.”

Ms. Canning first noticed that she could see motion when she observed a flash of light from a nearby metallic bag. She saw many doctors who couldn’t diagnose her condition. Eventually, Dr. Gordon Dutton, an ophthalmologist based in Scotland, was able to give her some guidance. Dr. Dutton was familiar with motion-based vision due to his reading of a paper written by a neurologist, George Riddoch, in 1917. Dr. Riddoch (the disorder is named after him) had seen the condition in World War I soldiers. (He is not to be confused with the Vin Diesel character, Riddick, who also has unusual vision, even if the names rhyme.)

The Scientific American story continued by speaking with a Canadian neuroscientist, Jody Culham, who began a 10-year study into Ms. Canning’s vision. Her team was able to confirm Ms. Canning’s ability to see motion. Some of the study’s remarkable findings were that Ms. Canning could catch a ball thrown her way and “reach and grasp.” She could see when a hand moved towards her.

Additional findings revealed that scans of Ms. Canning’s head “showed an apple-sized hole where the visual cortex should be. But the lesion apparently spared the brain’s motion-processing region, the middle temporal (MT) visual area.” Another neuroscientist stated that the intact MT was the key to Ms. Canning’s ability to see motion.

Doctors are now trying to understand “how information from the eyes gets to the MT without traveling through the visual cortex.” Dr. Culham believes the main road to the MT ended for Ms. Canning but somehow some side roads were able to travel to the MT. Dr. Culham thinks these side roads exist in everyone’s brains – as remnants of the early visual system that evolved to detect approaching threats even without full-fledged sight.”

Ms. Canning’s story is interesting – and so is the scientific research into her condition – but what really made our gears start turning was wondering how that research could help other people who have sustained penetrating brain injuries. If scientists can map new pathways in the brain, or if they’re able to find some kind of “shortcut” that the brain can take that allows people to see without actually seeing, then perhaps that work can be applied elsewhere.

At the Rocky McElhaney Law Firm, our Gladiators in Suits work with neurosurgeons, researchers, and other healthcare professionals to keep current with the most recent medical advances. We work with doctors and independent medical professionals because we understand how life-changing traumatic brain injuries can be. We also work aggressively to hold car drivers, property owners, and others liable for causing TBI accidents.

To schedule an appointment with an experienced Nashville TBI lawyer, please phone us at 615-425-2500 or complete our contact form. We have offices in Nashville, Hendersonville, and Knoxville, Tennessee. Our lawyers represent clients across the state.