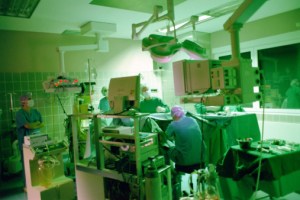 According to FDA documentation, the Vagus Nerve Stimulator therapy system (VNS) was developed by Cyberonics, Inc. to treat patients with epilepsy or treatment-resistant depression. However, based on the results of a clinical study of more than 200 patients who had the device implanted and turned on, during the first three months none of the patients showed any significant advantage over the patients who had the device implanted but not turned on. One year later, between two and three out of ten patients showed a clinically significant improvement in symptoms. Some patients had no improvement at all and some got worse.

In a case study prepared by the Union of Concerned Scientists, they reported on the FDA's approval of the VNS by Dr. Daniel G. Schultz, the FDA's Director of the Center for Devices and Radiology and Health, despite the fact that the device had not proven to be safe and effective before approval.

What are the dangers of the VNS device?

The FDA information about VNS came out in 2005. In August of 2016, CNBC published a story about Shelly Wilhite, a patient who died after having been implanted with the VNS device. She died less than 48 hours after complaining of abnormally painful shocks from the device.

In their article, CNBC also reported on the fact the Cyberonics was classifying patient deaths as injuries and malfunctions. Madris Tomes, a former consultant to the FDA, has launched a company which offers a streamlined way for the clients to search FDA reports about medical devices from tongue depressors to pace makers. Tomes data has so far uncovered 4,000 patient deaths initially classified as injuries or malfunctions.

The FDA's MAUDE database, which catalogs and aggregates adverse reporting for medical devices reveals more than 10,000 reports of injuries, malfunctions and deaths linked to the VNS device. Many of the deaths are classified as SUDEP, which means a sudden, unexplained death of a patient with epilepsy.

If you have suffered an injury caused by a dangerous or defective medical device or drug, you may be able to take legal action against the manufacturer. At the Rocky McElhaney Law Firm, we have a team of medical products liability attorneys who are here to fight for you. To schedule a free consultation with a defective medical device lawyer in Nashville, Hendersonville or Knoxville, please call 615-425-2500, or fill out our contact form to find out more.

Should Prescription Drugs be Advertised Directly to Consumers?