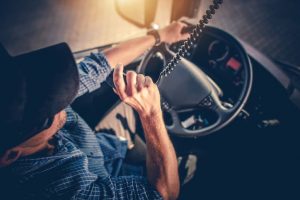 Truck drivers have a challenging job that requires them to transport goods under a tight schedule across our nation's highways. Meeting those tight deadlines requires truck drivers to have a lot of stamina. To qualify for a CDL (commercial driver’s license) a truck driver must also be in good health. The U.S. Department of Transportation (DOT) requires truck drivers to pass a health screening to make sure that they do not have any health conditions that might contribute to an accident.

A story on CBS News reports that in 2014, nearly 70,000 drivers out of an estimated 8.5 million were disqualified to drive. But part of the health screening requires truck drivers to disclose health conditions that could mean that they will lose their job. The Federal Motor Carrier Safety Administration (FMCSA) Medical Examination Report form requires truck drivers to voluntarily disclose, on the "honor system" any dangerous and potentially disqualifying medical conditions. Some of the driver health history questions on the health screening form include the following:

Because the disclosure is voluntary, if a driver answers "no" or "not sure" to these questions, there is no way to independently verify their responses.

A tragic example of the problem with allowing truck drivers to disclose (or not disclose) critical health problems occurred last spring. In April of 2016, 35 passengers were injured when a Greyhound bus driver blacked out behind the wheel and ran the bus off the highway. According to a CBS News story, just weeks before the crash, a DOT medical examiner suspected that the driver had sleep apnea, which is a breathing condition that disrupts sleep and causes fatigue. The medical examiner gave the bus driver a 90-day waiver and told him to get tested for sleep apnea. Two days before the crash, the bus driver saw his personal physician, who also happens to be a DOT medical examiner, Dr. Kunkel, but the doctor claims that the bus driver failed to disclose some of his symptoms and that he had a referral for a sleep test. After the crash, a court-ordered sleep test revealed that the bus driver had sleep apnea and he was disqualified from driving commercially.

In the CBS story, the DOT says that safety is its top priority and fraudulently obtaining a medical certificate is illegal. The American Trucking Association is troubled by aspects of the DOT health screening process and would like to see further reform.

If you have suffered serious injuries, or if you have lost a loved one in a truck accident, your truck accident attorney will likely investigate whether the truck driver who cause the crash that injured you or took the life of your loved one was medically unfit to drive a commercial vehicle. The truck driver and the company that employs the driver may be held liable for your losses. A skilled truck accident attorney form the Rocky McElhaney Law firm will hold all responsible parties accountable for your injuries.

If you need help because you or a loved one was injured in a truck accident, contact our Gladiators in Suits at Rocky McElhaney Law Firm. Our Nashville truck accident lawyers are ready to fight for your right to fair compensation when you have suffered a serious injury because of a truck driver's negligence. We have obtained numerous verdicts and settlements in the six-and seven-figure range. Call us at 615-425-2500 or use our contact form to make an appointment at our Nashville, Hendersonville, and Knoxvil