If you ask people which cars they think are the safest, the chances are pretty good that Volvo’s name will be mentioned more than once. The company has built its reputation on safety.

But over the last decade, it’s become harder and harder to trust auto manufacturers, no matter which ones they are. Between GM’s faulty ignition switches, and Honda’s exploding Takata airbags, and Audis which sometimes catch fire for no discernible reason – why should you trust a car company, right? After all, 32.7 million vehicles were recalled in 2018. It doesn’t really inspire trust.

But the latest ad from Volvo came out.

At Rocky McElhaney Law Firm, those are the types of injuries we see every day. Those are the people we help: the 16-year-old girl, the 31-year-old mother to be, the 72-year-old matriarch whose family is lost without her.

We may not know the stories of the people in Volvo’s ad, but make no mistake – we know families who are affected by stories like those. We know the long-term damage car accidents have. We know what they do not only to the victims, but to their loved ones.

The thing about whiplash, neck injuries, and women 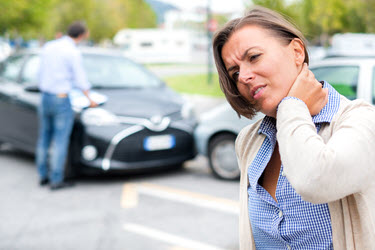 Whiplash has a bad reputation, in part because TV shows tend to use it as a “fake” condition. No one ever really gets whiplash, they say; it’s all a scam.

But whiplash is a real condition, and it’s a serious one, too. It doesn’t take a lot of force to snap your head forward in a rear-end crash, and physics – for every action, there is an equal and opposite reaction – ensures that your head will snap back. A 2016 study published in BMC Public Health found that five years after sustaining severe whiplash injuries, the victims’ quality of life had deteriorated in a measurable way.

Is Volvo’s claim correct – that women are more likely to develop whiplash than men? According to a study published in 2011, “the odds for a belt-restrained female driver to sustain severe injuries were 47% higher than those for a belt-restrained male driver involved in a comparable crash.” The 2016 BMC Public Health study reflected that same outcome. Out of the 352 people involved, 167 developed some form of whiplash. Of those 167, 106 were female. Female victims accounted for just shy of 2/3 of the Grade 1 (less severe) and the Grade 2 (more severe) whiplash injury groups.

– Whiplash Injuries Caused by Rear-End and Other Accidents

The truth is, there seems to be no set reason why women are more likely to sustain neck injuries when in a car crash. Volvo says it has to do with the size and shape of women being different from that of men. Others seem to believe it has to do with the shape of the seats in the car. It could be related to men’s lower center of gravity, or women’s curvier spines.

By testing cars with “female” crash test dummies, Volvo is attempting to figure out how car crashes affect women’s bodies differently from men. Ideally, this data can be used to make cars safe for everyone. As Dr. Matthew Reed (University of Michigan Transportation Research Institute, head of biosciences) explains, “The fact that people are still being seriously injured in crash scenarios similar to those in which dummies do well shows that a really important part of the picture — human variability in body shape, posture and sensitivity to injury — is missing.”

We hope other manufacturers use the data Volvo collected to create safe cars. As injury lawyers, we’re always a little skeptical of promises made by the auto industry; we’ve handled claims where Volvo vehicles didn’t live up to their end of the bargain, too. But if the data complied forces the issue, and leads to the creation of newer, safer tech? That’s pretty cool.

Until we have safe cars, though, we all need to keep working on being safe drivers. If a negligent driver hits you and you get hurt, Rocky McElhaney Law Firm will be there. Our Nashville car accident lawyers will never stop fighting for you, for your family, and for your future. Call the Rocky McElhaney Law Firm today at 615-425-2500 or by filling out our contact form, and schedule your free consultation at our office in Nashville or Hendersonville.

Breaking Down Your Car Accident Settlement

A Breakdown of Common Terms in an Auto Accident Claim

Nashville personal injury attorney Rocky McElhaney represents people who have been injured in car, truck and other automobile accidents as well as many other forms of negligence throughout the state of Tennessee.