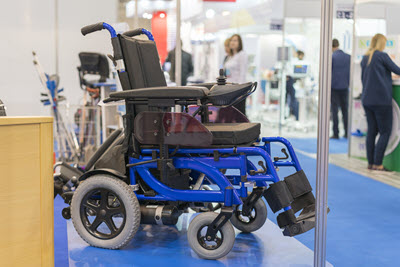 But it wasn’t until his friend and fellow songwriter Troy Verges mentioned an incident with his mother than Barry was moved to act. Verges told Barry that his mom’s power wheelchair had tipped over, and that she had injured her face and knee as a result. Barry thought of his own daughter then, and knew that something had to be done to protect those who use these chairs every single day.

An idea turns into reality

When Barry teamed up with his brother, Jered, the duo thought that if motor vehicles were able to automatically stop when pedestrians or other hazards are detected, why can’t wheelchairs do the same?

“The bathroom scale is smart, a toaster is smart, surely a wheelchair can be smart. Surely somebody has done this!” Barry Dean said. “But we couldn’t find it.”

The end result is Luci, a system of cameras and sensors and other technology that is mounted to the bottom of a motorized wheelchair. It is named after Katherine’s favorite Beatles song, “Lucy in the Sky with Diamonds.”

The original idea was the placement of a beeper on the wheelchair that would alert Katherine when she was about to collide with something. (This did not last as Katherine laughed each time the beeper activated and simply enjoyed bumping into things to set off the beeper.)

This fall, Luci will hit the open market for $8,500 per package. Barry and his brother hope that insurance will cover the majority of the cost. Even though projections have the business being profitable, Barry is hoping the company’s success will open a whole new world for inventors.

“We would love to see this be a catalyst for a whole new wave of development in this field,” he said. “We want to change the experience for the next Katherine Dean.”

At Rocky McElhaney Law Firm, we keep our eyes and ears open when it comes to medical improvements and changes. If you have sustained an injury related to a defective wheelchair or other device, or if your child has sustained a birth injury, we’re ready and able to fight for you. Call one of our offices in Nashville, Hendersonville, Knoxville, and Clarksville at 615-425-2500, or complete a contact form on our website.