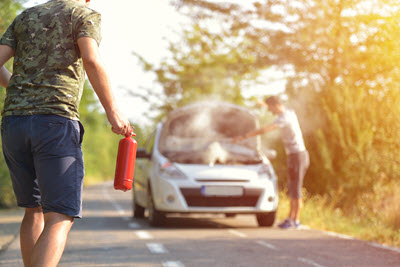 We love a good fire as much as the next person. Whether we’re toasting up some marshmallows or just keeping warm on a cold night, there’s a lot to be said for a good fire.

We just don’t want those fires in our car and truck engines. Yet it seems like every day, there’s another news story about a car catching on fire. Most of those stories involve electric cars. Take the Chevy Bolt.

It held some promise as an electric vehicle, but with reports of the vehicles burning up in garages and driveways, it lost momentum as a viable, safe vehicle despite its design and low prices. Per Jalopnik, GM seems to be considering pulling the plug on this line of cars, though for now, the manufacturer claims that production is simply paused for the year of 2022.

If you’re thinking, “Well, I’ll just buy a hybrid instead of an electric vehicle,” you may want to think twice. A new Kelly Bluebook study that cites the National Transportation Safety Board and the National Highway Traffic Safety Administration claims that electrical vehicles, such as the Bolt, catch on fire at a lower rate than internal combustion engines (ICEs) and hybrids. Jalopnick reports:

The study claims that hybrids are actually involved in the most car fires out of every 100,000 cars sold, outnumbering the number of fires involving both fully-electric cars — like the Chevy Bolt — and ICE cars combined….

Of course, given the lower number of hybrid cars on U.S. roads, the number of most fires in total still goes to ICE cars. The study says gas-powered cars saw 199,533 fires. Hybrid cars accounted for 16,051 fires. Fully-electric cars came in with 52 fires total. The study claims these figures are for the entire year of 2021.

So, what’s causing all these fires? It depends on the type of vehicle, though the primary culprit for EVs and hybrids was the battery. According to Auto Insurance EZ, “This is a stark difference from the gas recalls, which were recalled for issues with fuel leaks, electrical shorts, and anti-lock braking systems (ABS).”

Who is liable if I’m hurt in a car fire?

If you have been injured in a car fire because of faulty batteries or an issue with the fuel line, you can file a product liability claim to hold the car manufacturer liable. Taking this action could see you receive financial compensation for your medical expenses, your lost wages, your pain and suffering, and your property losses. Trying to figure out the complex ins and outs of the legal system, especially when it comes to product liability, can be difficult, but there are three basic arguments:

Cars already pose a risk when we get in them to drive places; we do not need the increased risk of fire to be another one. The errors and flaws that made these cars apparently more at risk for fire should have never made it to market. If you suffered injuries in a car fire, you may be eligible to compensation. Rocky McElhaney Law Firm is here to help you get the compensation you deserve from companies who may care more for your money than providing a safe product. Call us at 615-425-2500 or you can fill out our contact form, if that’s easier for you. We’d love to set up a free consultation with you at one of our offices in Nashville, Hendersonville, or Clarksville.