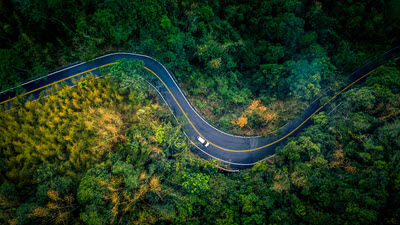 Often, we think of driving in the city as treacherous territory, and it does come with its own risks; however, more deaths occur on rural roads. What with less traffic and fewer pedestrians, it’s hard to imagine why there’s an increased risk of crashes and accidents on these roads, but the facts don’t lie.

And the facts have been telling us the same thing for a very, very long time. According to NPR, in 2008, “56 percent of the nation’s 37,261 traffic fatalities occurred in rural areas…. In some states, more than 90 percent of highway deaths occur on rural roads.” Eleven years later, data from the Centers for Disease Control & Prevention (CDC) made the same point: “according to a 2017 study from the Centers for Disease Control and Prevention, adult motor vehicle drivers and passengers in America’s most rural counties had motor-vehicle death rates three to 10 times higher than those in the most urban counties.”

So, let’s find out what exactly is causing these car accidents and fatalities. What risks do the bumpy roads of the countryside hold for us, and what can we do to keep ourselves safe while driving on them?

Why are rural roads more dangerous?

Using a seatbelt buckle is one of the first things we learn when learning about cars. Our parents teach us the importance of buckling up, but studies have found that when on rural roads, Americans are less likely to buckle up. The 2017 study mentioned earlier also found that on rural roads, there is a lower use of seatbelts and a higher rate of fatalities, and that those who’d been in a crash on rural roads were more often found not wearing their seatbelts.

Seatbelts are a critical tool in saving lives. There’s a reason we were taught at a young age to use them anytime we entered a car.

Seat belts are the single most effective safety technology in the history of the automobile. A National Highway Traffic Safety Administration (NHTSA) study of lives saved by vehicle technologies found that, between 1960 and 2012, seat belts saved more lives—329,715, to be exact—than all other vehicle technologies combined, including air bags, energy-absorbing steering assemblies, and electronic stability control. Per their most recent data, seat belts saved close to 15,000 lives in 2017 alone.

The lack of seatbelt usage isn’t the only reason why there are more fatalities on those backroads, but it is an important one. Make sure to buckle up when you head home, or even if you’re just on your way out of the city to visit Grandma.

Now that we know to buckle up, it’s time to let loose on those country roads, right? The speed limit may be higher than in the city, after all. Unfortunately, those higher speed limits can lead to more fatalities. When on rural roads, drivers speed up to match the higher speed limits and often go faster than that. According to the Insurance Institute of Highway Safety (IIHS) data from 2019, 27% of all traffic fatalities on rural roads was the result of speeding, and “although 19 percent of people in the U.S. live in rural areas and 30 percent of the vehicle miles traveled occur in rural areas, almost half of crash deaths occur there.” High speeds on curvy, bumpy roads is not a great match, not to mention any number of animals that might suddenly dart out to try and cross the road at the same time as you’re mounting a hill. And what about slippery and dark road conditions on top of that? These factors all add to that high death rate among car crashes on rural roads. So don’t speed when driving over those dangerous back roads. You’re already taking a big enough risk as it is.

One final reason we’ll bring up when considering the high casualty rate of driving on rural roads is right in the name itself: Rural roads are, well, rural. If you get into a crash out there, the likelihood of emergency vehicles getting to you in a timely and efficient manner is far slimmer than if you had a car crash on a city street. And once the ambulance gets to you, it then has to take you to the hospital, which can be a great distance away – if you have one at all. Unfortunately, these factors lead to a decreased chance of survival, made even more tragic by how preventable it should be. It’s important that if you do find yourself in an accident, that you receive the care you need in a timely fashion. The difference is sometimes life or death.

Now, this isn’t meant to scare anyone from traveling on country roads; after all, life takes us all sorts of places. But it is important to know the risks and dangers of driving in rural places. We need to take all the precautions we can to protect ourselves, others, and our loved ones who may be traveling with us. Wear your seatbelts, travel at safe speeds, keep your guard up for any abnormalities on the road, and be aware of the true danger of getting into a car crash far from emergency services.

We think your safety is important, and if you’ve experienced a crash or accident on a rural road here in Tennessee, call the Nashville car accident lawyers at Rocky McElhaney Law Firm to get the help you need: (615) 425-2500. You can fill out our contact form, if that’s easier for you. We’d love to set up a consultation with you at one of our offices in Nashville, Hendersonville, or Clarksville.