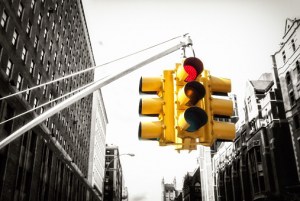 A five-car crash, resulting from a driver running a red light, wreaked havoc on Antioch Pike in Nashville on October 21st. A reckless driver barreled into a tractor-trailer after ignoring a stop light, and three more cars were hit as a result. Two people were transported to Vanderbilt Hospital and treated for non-life threatening injuries. While investigators are still looking into the details of the accident, alcohol may have been involved.

According to the Insurance Institute for Highway Safety, running a red light is the top cause of urban car crashes. In 2014, 709 people were killed and approximately 126,000 were injured in red light-related auto accidents.

When a driver fails to stop at a red light or stop sign, other drivers in the intersection are often caught completely off guard. Although it is shocking and traumatic in the moment, their blatantly negligent actions may help prove a legal case in the long run. Your attorney can use a traffic citation or other evidence that the driver ignored a stop light as evidence that the other driver caused the crash—and is legally responsible for your expenses. On top of civil damages, they may owe additional fines, and could face license suspension or even jail time in particularly egregious circumstances.

In Nashville and across Tennessee, automatic traffic cameras help catch drivers who break traffic laws. In auto accidents involving running red lights, a traffic camera may have picked up the driver ignoring the traffic signal before, during, or after the crash. Roadway videotape should be checked to help verify that the driver did in fact break a law.

Although cameras are controversial, a study done by the Institute for Highway Safety found that red light cameras reduced the rate of fatal accidents caused by running a red light by 21%, and the rate of all types of fatal crashes at signalized intersections by 14%.

Don’t let another driver get away with negligence. You deserve justice — and fair compensation for your injuries, property damage, and pain and suffering. The Rocky McElhaney Law Firm employs a team of Nashville auto accident attorneys who take a personal and vested interest into every single one of our clients. Speak to one of our gladiators today at 615-425-2500 or use our contact form. We serve clients in and around Nashville, Hendersonville, Clarksville and Knoxville.