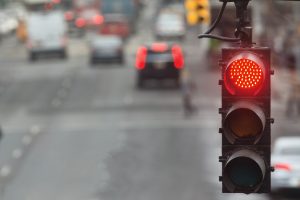 A new report from the Insurance Institute for Highway Safety reveals that the percentage of drivers who are running through red lights increased 17% between the years 2012 and 2016. In 2016 alone, 811 people died nationwide because someone failed to stop for a red light. The IIHS study also disclosed that more than 50% of the red-light death victims were pedestrians, bicyclists, and occupants of vehicles other than the one that ran the red light.

The IIHS, AAA, the National Safety Council, and the Advocates for Highway and Auto Safety believe that responsive action by local and state governments is now required. The IIHS believes that part of the reason for the increase is that communities aren’t taking advantage of the red-light camera programs that are now available. Red light cameras are used to identify and ticket drivers who run through red lights when they don’t have the right of way or the proper authority.

What are the dangers of running red lights?

Drivers often run through a red light because they are speeding up to “beat” the change from yellow to red. In these cases, the speed at which the driver hits the other car can increase the severity of impact, and therefore increase the risk to both drivers and passengers. Other times, drivers may be distracted or impaired in some way, or may not realize that they need to wait for a green arrow to turn.

As a result, people can be seriously injured in a number of ways. Three common types of car accidents include:

At the Rocky McElhaney Law Firm, our Gladiators in Suits have been aggressively fighting for car accident victims for years. We hold car drivers and car owners liable for all the physical harm and emotional suffering they cause. Our Nashville car accident attorneys demand negligent and reckless drivers pay for your medical care and your lost wages. For help now, please call us at 615-425-2500 or fill out our contact form to schedule a free consultation. We have offices in Nashville, Hendersonville, Clarksville and Knoxville, but we fight for people throughout Tennessee.