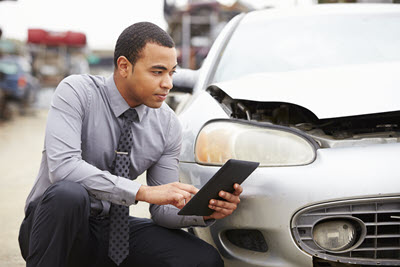 Let’s first define the basics of what insurance claims investigators do:

The Claims Investigations process is one in which Insurance Companies, Insurance Examiners, or Investigators obtain information to evaluate a claim. As a result, it may require perusing documents, locating witnesses, visiting and interviewing people, inspecting property such as vehicles, accident sites and physical locations to name a few.

There are a couple main reasons. One, they need to investigate whether or not the accident truly happened the way you say it happened. Insurance fraud does happen, so an insurance company needs to protect itself from losing money – its #1 goal. Second, the insurance company wants to know exactly how much they may be required to pay, right down to the penny. More often than not, these companies will attempt to deny payment, and if there is ANYTHING they can use to their benefit, they will – even if you are hurt.

Damage to your car

Firstly, after you’ve been in an accident, it’s important to take pictures of the damage to your vehicle — or even of the accident itself if you can. Your injury attorney may use them in order to evaluate your accident properly. In some cases, the insurance adjuster may even come out to the scene of the accident itself to take pictures for the insurance company. He or she may request your copies of the photos, too.

The insurance company wants to know exactly what it will be paying for; it does not want to spend more than it needs to in order to cover the costs of your accident. And more than that, the insurance company wants to make sure that it’s not paying for a “fake” crash: “With car insurance fraud being a major issue in the United States and fraudsters getting more creative over time, insurers are making bigger efforts to spot scams before the scammer gets paid. In fact, the National Insurance Crime Bureau reports that questionable claims have gone up 27 percent in recent years, showing investigations are more of a priority.” As long as you’re not lying, then you should have nothing to worry about when it comes to checking for fraud.

Injury to yourself or others

We’ve all seen the commercials before. The ones that say that if YOU’VE been in an accident, then you could be compensated for thousands of dollars from your insurance company. And those commercials are right. When you’re injured in a crash, you should be covered by your insurance company for the medical bills required to treat your injuries. Though, with more money on the line, the insurance company may be less inclined to hand over that money so fast. They’ll want a more thorough and complex investigation done on your accident. Remember: insurance companies are neither the good friend nor the friendly neighbors they claim to be, and keeping their money is their primary concern.

Either way, if you’ve paid for insurance and you’ve been hurt, the negligent party who caused your injuries should be held liable.

What are common injuries resulting from car accidents?

Some of the most common car accident injuries are incredibly serious ones, which can require months or even years of medical treatment. In some cases, a person may never fully heal. The more common injuries from car crashes include:

When to seek professional help

Damage to your vehicle or even to other vehicles is one thing. In the world of insurance, that’s one of the simpler issues to deal with, even if it is a hassle. But if you or others were injured in the collision, then that’s a more complicated issue and may require you to work with a lawyer. Besides helping you deal with the nitty gritty of insurance companies and claims, a lawyer can help prepare you for dealing with your claims adjuster, as they might become more involved if you have pricy medical bills that you need covered. A lawyer often helps the victim of the crash receive the most money when it comes time to settle, which happens in cases where the crash has caused an injury.

Car accidents can be complicated, not only for you on a personal level but on a financial level as well. It’s important to receive compensation where it is earned and needed. If you’ve been in an accident in Tennessee, Rocky McElhaney Law Firm can help. Call us at (615) 425-2500 or use our contact form, and we can set you up with an appointment at one of our locations in Nashville, Hendersonville, and Clarksville.