Montoya Taylor knows tragedy well.  She was one of six ladies who were in an SUV that was hit head-on by a drunk driver in Smyrna, Tennessee back in 2014.  But she, nor her friends have let the tragedy of the wreck dictate their lives.  Below is the honest and moving review that she wrote of our firm, which not only speaks on behalf of the incredible job Rocky and his staff did for her and the other 3 passengers  whom we represented, but more importantly tells the story of a spirit that couldn’t be crushed even after losing so much to a head-on collision.  We know what many people are going through after a serious and life-changing car accident; the uncertainty, the financial instability, and the all-encompassing worry that nothing is going to be the same again.  That’s why we think this is a story that needs to be told:

“Before I tell you about what Rocky McElhaney and his team means to me.  I have to tell you about myself because, in order for you to understand the greatness of his firm’s involvement in my life you must first know what I have overcome.

For many years, I was a single mom.  I’ve went through many struggles. I’m proud of how far I’ve come.  I bought a home in my twenties.  I didn’t go to school until I was 32.  I’ve been a nurse working in the pre-natal unit for a little over a decade.  I’ve seen a lot of things.  I love to work. I’m not the type of person who wants something for nothing or a “sue-happy” type person.  I have a photographic memory, love to sew and cook, and I love to help others. I was so good at cooking that I won a scholarship to a culinary school.  I’ve been in debt and gotten out of it.  I’ve fostered 22 children and adopted 6.  I’m a double cancer survivor.  I was diagnosed with liver disease two years ago and it’s a fight everyday.  I am a Jehovah’s Witness and my faith means the world to me.  The Lord gave me a second chance at love and blessed me with a wonderful soulmate for the last 10 years who I feel I don’t deserve.  But with the exception of my faith, family and wonderful husband, in February 2014 I feel like I lost most of these things that I used to identify myself for so long, in just a matter of seconds.

I was traveling in an SUV with six other ladies in Smyrna, Tennessee.  We were going about 30mph when we were hit head on by a drunk driver going 60mph.  That man lost his life in the wreck.  All I remember was rolling through the air and then waking up and hearing the emergency personnel say “They’re all DOA.”  That’s when I remember coming to for a second and screaming “I’m not dead! We’re not dead!”  Miraculously, all my sisters survived but we all paid a very big price physically, mentally, and emotionally.

The woman that was sitting behind me in the vehicle had broken her leg and hip in wreck and her leg pushed the metal rod of the head rest into the back of my head near my brain stem.  That caused a host of long-term brain injury symptoms.  I had 12 hours of visual blindness.    I suffered from chronic emotionally triggered-vertigo which looked and acted like narcolepsy when I got excited, sad or angry.  Though it’s less than it used to be, I still have uncontrollable nausea, vomiting and chronic dizziness.

Worst of all, I lost 15 years of my memory to amnesia of which is something I’m still coping with everyday.  Though they have gotten used to it, I feel just awful when I can’t remember my children’s names.  I can’t remember how to do many basic things that used to come second nature.  For a long time I thought that I actually carried my adopted daughter and gave birth to her until she told me that it wasn’t true.  That whole chunk of my life was just gone.  I lost my ability to sew, crochet and cook.  Not just the ability, but the passion to do those things as well.  Though I am very thankful that my injuries weren’t worse, learning to grow with my changing brain injuries has been very heavy on my heart.  Before the wreck, everyone thought of me as a great chef and home cook and looked forward to my cooking.  Now I stare at the stove for a half hour trying to figure out how to fry an egg.

I am a Jehovah’s Witness and so are the other ladies that were in the car with me.  The Jehovah’s Witness community is like family.  Dena, who has been with Rocky’s office for over 10 years is a Jehovah’s Witness, so we naturally connected looking for help with our claims for damages in the wreck.  In a injury claim involving six people and many different insurance companies, things can get complicated and tension can build quickly and put a strain on relationships.  Though only four of the six ladies hired Rocky  (myself included) as their lawyer, Rocky never pushed or made tried to pit us against the two other ladies riding in the car that did not hire him.

He explained every possible way we could seek financial recoveries in our cases. He laid it all out for us so that we could understand it.  Most importantly, he never forced us one way or the other. He respected our decision, even when it meant lesser recovery.  He treats everyone with the respect they deserve, and all that matters to him is that you leave happy with your results and that you leave doing a lot better than you were when you first met him.

I think most lawyers out there would have put more pressure on us to fight each other for more money, because the more we get the more the lawyer gets paid, but Rocky wasn’t like that at all.   I really feel like out of all of the lawyers out there, that Rocky and his team are really genuine about helping people and doing whatever it takes to make them happy and get them to a better place.   Though I know Rocky may not have always understood us, he truly cared for us, he listened and he fought for a fair settlement which we were very happy with today.

How much you ask?  Collectively, our main concern was just to make sure that the older sisters were taken care of and the rest of us were just praying to get back to zero.  My husband and I were praying for a certain number and wouldn’t you believe, He delivered in the form of Rocky McElhaney Law Firm.  I not only was able to pay off my medical bills but I was able to pay a the final $50K on my home loan and pay off my house.  He and Dena and his firm have helped my family to become debt free.

Even though I’m still grappling with some amnesia and other chronic symptoms from the accident, I am thankful for the journey and thankful for the Rocky Law Firm coming into my life.  They did an honest job for honest pay and helped me to get my groove back.  And I believe that my other spiritual sisters who were in the car with me would tell you the exact same thing.

On February 17, 2014, 6 friends traveling in an SUV were hit head-on by an intoxicated driver on Old Nashville Highway in Murfreesboro (Rutherford County).

A key witness told authorities that the defendant driver, Ronald B. King (53) of Murfreesboro, had attempted to pass him by crossing the double-yellow line but ended up crashing into the SUV head-on.  Three medical helicopters were sent to the scene and transported two of the patients from the SUV.  King did not survive.

Each of the six women in the SUV suffered severe and debilitating injuries, Debbie O. was one of those women. The group of friends was in dire straits and called our firm for help.

It was an extremely complicated case due to the number of injured people and the various insurance companies involved. But, Rocky and Dena pushed back and fought tooth and nail and got each one of our clients a very handsome recovery that will help take care of them while they continue to heal.

For us, the reward is in seeing the relief our clients have once we have resolved their case and provided them with a means to move forward from such a horrific incident. We never ask for a thank you. But it is sure a wonderful feeling when we get one. The image below is a picture of the thank you card we received from Debbie this week which read:

“I just want to let you know how much I appreciate all of your hard work on behalf of me and all my dear friends. I know you worked very hard to get me the settlement I received. I also want to let you know how much help Dena Gibson was with my case. She kept me well- informed and was always ready to answer my question. I will always recommend your law firm to anyone who needs your help.” 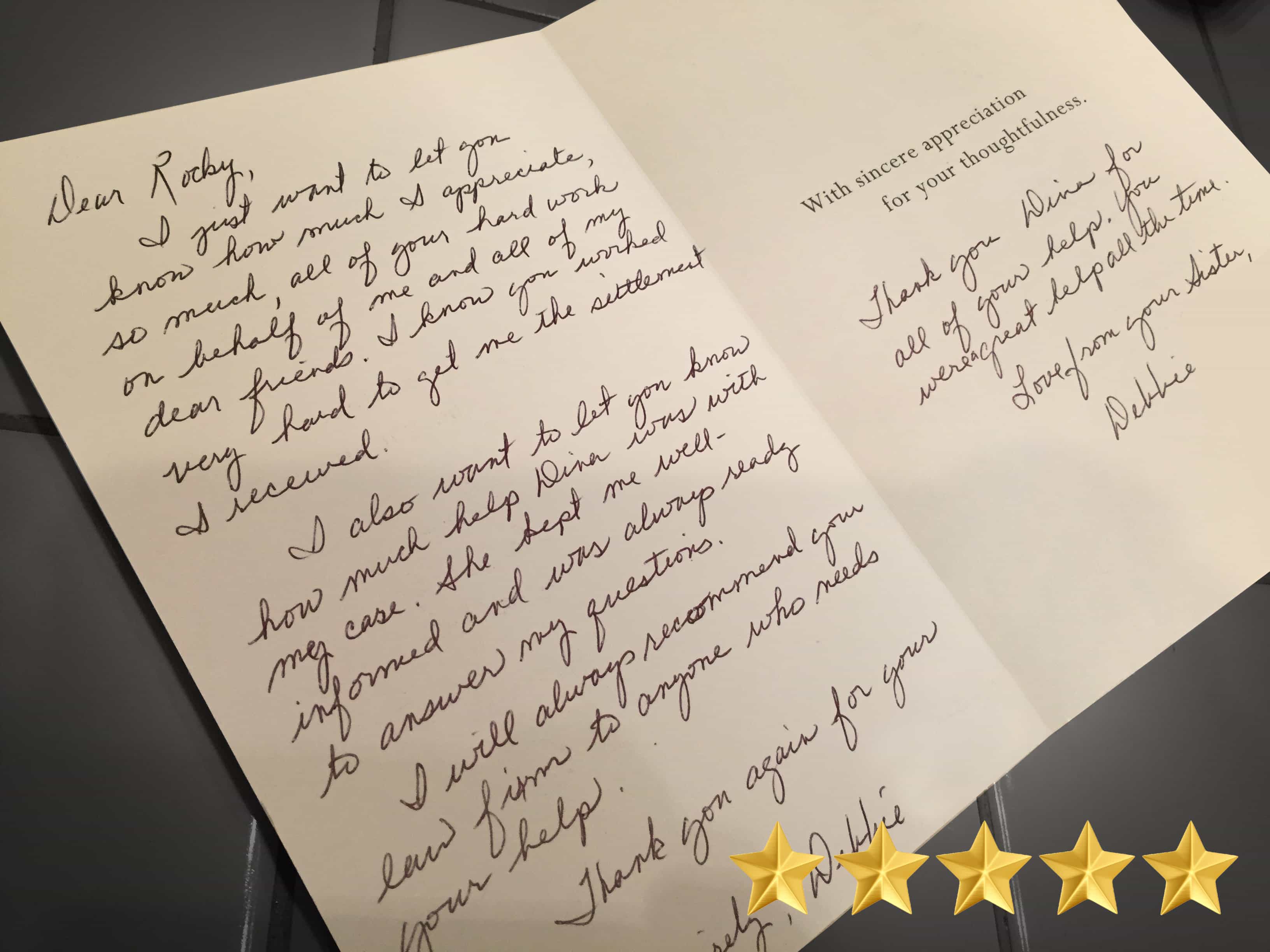