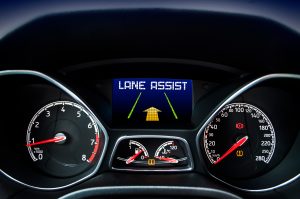 There’s been a lot of new vehicle safety tech introduced over the last few years, but one of the more popular systems offers lane departure warnings (LDW). This system alerts drivers when they cross over a lane marker. They’re a little different from lane keeping assistance (LKA) systems, which affect the steering column to prevent a driver from crossing that line in the first place.

Lane departures (also called roadway departures) are among the deadliest accidents there are. According to the Federal Highway Administration (FHWA), “from 2016 to 2018 an average of 19,158 fatalities resulted from roadway departures, which is 51 percent of all traffic fatalities in the United States.” In 2020, there were in Tennessee alone.

So, we were excited to learn that LDW technology reduces not only the number of crashes each year, but the severity of injuries that people sustain when they do get into an accident. A 2018 report published in the Journal of Safety Research found that “vehicles with LDW had significantly lower involvement rates in crashes of all severities (18%), in those with injuries (24%), and in those with fatalities (86%).”

The data is clear: these systems reduce accidents and injuries. But as it turns out, a lot of drivers don’t really care for the systems.

Consumer Reports surveyed vehicle owners about their experiences with three different systems: lane departure warnings, lane keeping assistance, and lane centering assist (LCA), which also controls the steering to keep a vehicle centered within the two lanes. Per their findings, “unlike other advanced safety systems, a very slim majority of drivers said they were ‘very satisfied’ with LDW and LKA. A larger number said they liked LCA. But many respondents indicated that they were confused about how lane systems work, and the differences among multiple, similarly named systems.”

It appears to depend on the system. According to one owner, “The lane departure warning and lane keep assist are the only safety features I don’t particularly like about my Forester, simply because they are wrong much more often than they are right. I frequently get alerts when I haven’t left my lane, or, for example, when I try to give a large vehicle, disabled vehicle, or bicyclist extra room.”

In short, most owners seem to find the systems a bit overzealous by working the way that they should. There are times when a driver simply needs to shift a bit, such as around an oversized vehicle, or when sharing the road with a cyclist. Depending on the system you have, your steering wheel may begin to shake, or you may hear a loud noise, and that can be distracting. Further, the systems are less effective when the roads are pristine. Per Consumer Reports, “LKA, LDW, and LCA systems are only as good as the lines on the road, and they can become confused by multiple markings painted during road construction, lane lines that are faded or covered by snow, markings that suddenly disappear or merge as lanes come together, or if the camera lens is blinded by direct sunlight.”

It appears that these systems still have a few quirks that need to be worked out. But given the data, drivers really are safer when they have vehicles with lane departure warning/lane assist systems and use them.

What kinds of car accidents are caused by lane departures?

A lane departure can lead to a single- or multi-car collision, depending on where or when it happens. Among the most common types of crashes caused by lane departures are:

While any driver is at risk of injury in a lane departure accident, the greatest risks are to pedestrians, cyclists, and motorcycle riders. These three groups of people have the least protection possible in a car accident, especially a collision that happens at a greater speed. The risk of a fatal accident is high.

What can I do if I was injured in a lane departure accident in Nashville?

If you were the victim of any kind of car accident in Nashville, our injury attorneys can help you. The first thing you want to do is seek medical attention, even if you think you aren’t seriously injured. Some injuries can get worse over time, so it is important that you get yourself checked out. You want to make sure you’re getting the treatment you need form the start. By calling 9-1-1, you also ensure that police come to the scene of the crash; their record of the incident can be useful later when you make a claim.

If you are able, you should also take pictures or videos of the scene. Make sure to photograph your car, the road, and your own injuries. If you cannot take these pictures, ask someone to take them for you.

We also want you to call Rocky McElhaney Law Firm. Our Nashville car accident lawyers have years of experience handling single- and multi-car crash claims, including those caused by lane departures. We know how serious these types of wrecks can be and have secured millions of dollars in verdicts and settlements for our clients. Let us help you, too.

Rocky McElhaney Law Firm has offices in Nashville, Hendersonville, and Clarksville, and fights for car accident victims throughout East Tennessee. Don’t wait to call: get a Gladiator on your side today! Please call 615-425-2500 or submit our contact form for a free consultation.